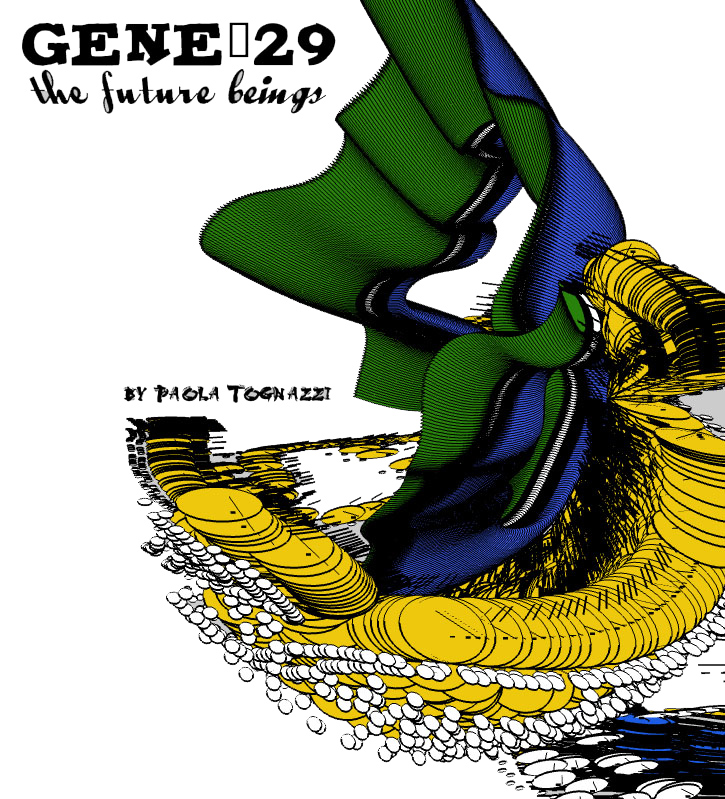 Aurora is an Interactive multiplayer audio visual installation for physical spaces and digital facades based on mobile wireless sensory technology of movement capture data. The installation analyzes the dynamic energies and rhythms of the audience’s body and translates it into musical and visual projections. It allows an immediate connection between body and software, so the users can immediately see the effect of their movements and learn from it in real time, thus developing physical awareness, listening of the body and physical communication. By integrating new media and storytelling, it creates sensorial and seductive experiences, where the audience can listen to their bodies and interact socially. Through the open source w_dynamics software and the Iphones, captures in real time the data of the user’s movements. Two persons, each with their Iphone, draw the live interactive visuals together, feeding back and inspiring the one to the other. Through the touch screen they can change the audios and the type of brush with which to draw. Technology and Body become one. Your inner world takes control of the exterior one transforming the city’s architecture into organic spaces an alive organisms, a space to regain awareness and corporal expression, while mirroring what we are made of. 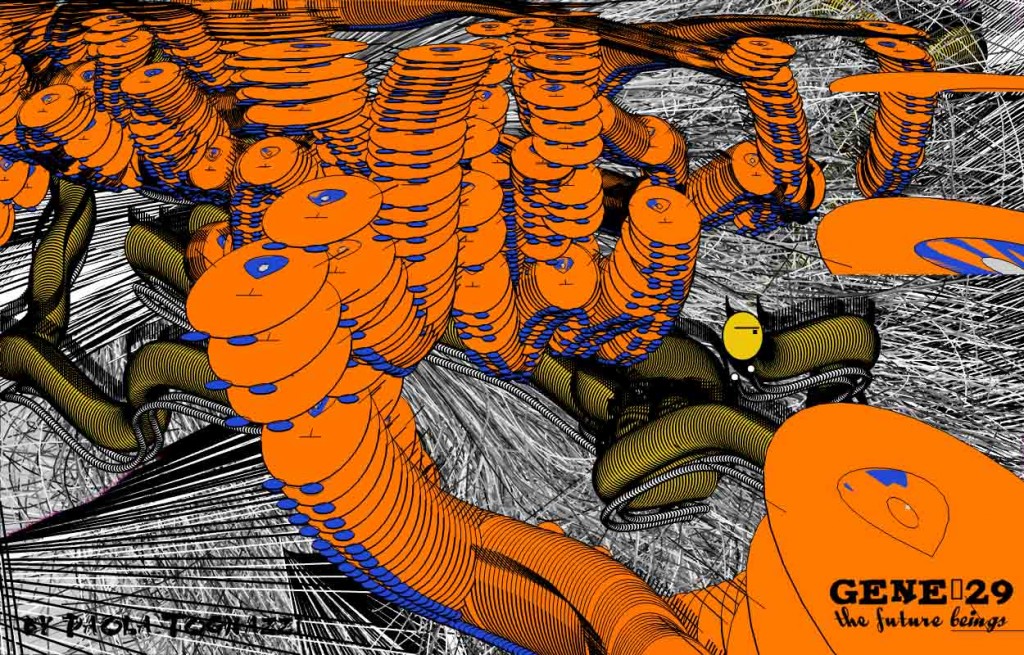 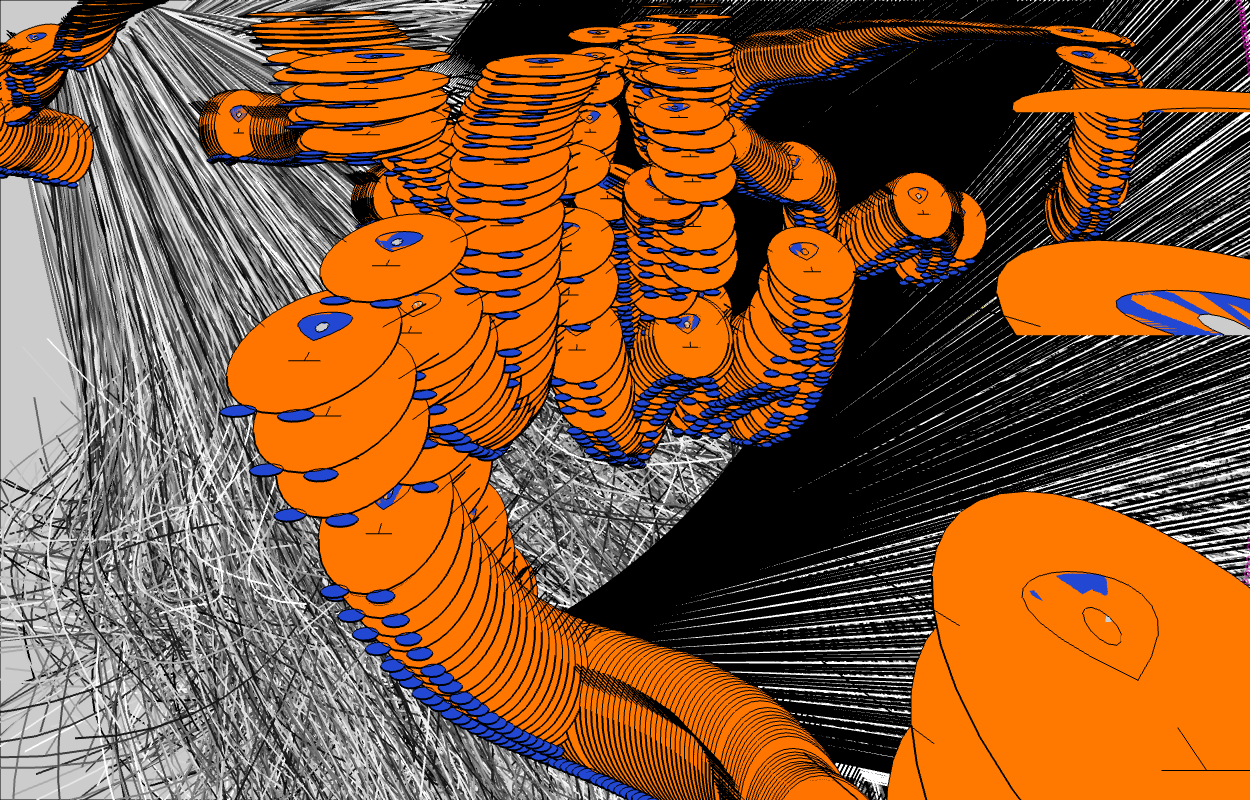 It comes from questions like What’s the next stage in the evolution of humanity? Will we merge with the machines and with each others? Does technology shape the body? Does the body shape technology?
How can we re-perceive and listen to the body as body, today in the digital era, integrating and harmonizing the old language of body expression, with the one of new technologies, to stimulate the expressive qualities generated by movements and conditions like will, effort, and desire.

The final paintings tell the stories of their bodies, portraying their internal dynamics, visualizing their organic architectures in this way revealing the identity of their movements.
It shows to the outside what happens inside and it claims the public space as a space to regain corporal expression and awareness, while the private filters smoothly through fluid spirals into the public.
The cities become the mirror of the inner world that we are made of, transforming itself in the sensitive and social body. A world, that isn’t just a technical exercise but goes beyond creating poetic and imaginative worlds that move with you, putting in evidence the delicate relation between human beings, their inner bodies, and space, while facilitating an exploration and a dynamic understanding of the process.
The feedback from the audience was: Technology and body become one in an hypnotic experience!

My work explores the sensuality of interactive designs and how to use sound and visuals to navigate and create personal and intimate environments. It creates experiences in collective games that physically and emotionally engage the audience and foment them to develop physical awareness. My passion is to do with the body. Knowing, feeling, listening to, and learning from the body’s extreme intelligence. The brain is part of the body our thoughts and memories are processed in and through it. The body is our root to the world it’s not just a tool or an interface to the world but it’s what we are. And yet we know so little about it. We know how many letters there are in the alphabet but we don’t know how many bones and muscles we have and all the possibilities of combining their combination. And yet we truly communicate more with our body than with words. Living in this current time I pose myself questions like What’s the next stage in the evolution of humanity? Will we merge with the machines and with each other, creating the New Human, Humanity 2.0, permanently wired into the universal Mind of Mankind, and rid of individual existence? I like to investigate and question what it is to be human in a networked reality, searching for links between the technologies of communication and information. How does technology shape the body? How does the body shape technology? Will we still be human if we merge with the machines? Or are we already machines?
Basically how can we re-perceive and listen to the body as body, today in the digital era, integrating and harmonizing the old language of body expression, with the one of new technologies, to stimulate the expressive qualities generated by movements and conditions like will, effort, and desire. For this in my work i focus on multi user interactive tools, where social interaction plays a primary role, that allow the audience to develop physical awareness, listening of the body and physical communication and create an immediate connection between body and software. So the users immediately sees the effect of their movements and learn from it in real time.

Video-Installations:
Take me home “finalist at the MovilfilmFest 09”
Autopsy of a dream
Ghosts
The Lizard
Trilogy: Operation Brainwashing
Fragility of the Supergirl
Iben
Barrio Gotico: «Portraits of a ghost”