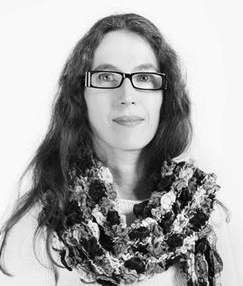 Paola Tognazzi artist and physical interaction designer studied industrial design at the IED of Milan, Philosophy at the University of Bologna. In 2001 graduated from the Amsterdam University of the Arts, specializing in Choreographic storytelling within 3Dimentional interactive audio visual installations. Worked as assistant of Sasha Waltz in Nobody, with Min Tanaka in Japan, Executive Producer of interactive operas at Studio Azzurro Milan.

In 2008 founded Wearable_Dynamics embedding movement in materials and wearable systems. She produces interactive immersive environments that invite participants to become performers and develop physical awareness and expressive control. She takes inspiration from the sensuality of electronics and the erotics of movement control systems, to design wearable systems that give sensing and expressive superpowers, allowing wearer’s to sense, connect and be touched by their own data.
Her expertise is to embed movement in structures like codes, sound, visuals or 3D material. Her skills lies in body anatomy, analyze, filter and map data that make movements individual, special, different, and the application of movement capture sensors to design body informed mutually informing dynamic systems allowing the participants to be simultaneously audience and performers of their own identity and transformation.

With Wearable_SuperNow, and Aurora she develped interactive wearable instruments, embedded with movement capture sensors, that allow wearers to produce and control audio visuals with the dynamics of their bodies and can be applied to create games and narrative performances.

Within the platform Conexiones Improbables, she directed and designed the project «Humanising the Software» with the I+D department of the Software company I68. Since 2009 has been giving Wearable_dynamics workshops: Applying creativity/Defying interactivity” in Asia and Europe.

In 2014 she has proven the concept of REACTIVE 3D PRINTED WEARABLES with The Dragon is Alive, a 3D printed wearable skin able to change shape, interacting with the movements of the wearer. The project was developed at the Wearable Senses department of the Tu/e University of Eindhoven in collaboration with the dutch companies Xsens, Freadom of creation (3D Systems) and fashion designer Pauline Van Dongen.

Since then she has been developing body informed morphing wearable systems with 3D printing technology, tutoring PhD students at the Tu/e Eindhoven, teaching Electronics and interactive wearables prototyping at the IED Fashion Futures Master.
Part of her research is motivated to find artistic structures and cheap accessible DIY technology to develop interactive games for persons with movement disabilities and conditions like Parkinson and Muscular dystrophies.

Currently she is doing a PHD at the Universities of Napier and the University of Edinburgh collaborating with Dovecot Studio on: Future Skins, 21st Century tapestry. Interactive performing textiles able to amplify our sensorial perception and augment our reality.