A series of 3 interactive installations, GENE 29 Microcosmos, Synchronicities and Sublimation. They are based on the character of Gene 29. The series shows how focusing on different parameters: scale, rotation, 3D view point perspective, transforms the same composition pattern.

“Zooming inside a body we find an hotel full of rooms and stranger guests, the DM1 dark passengers, passing by, crossing path, leaving trails. With each step, the DM1s leave tiny invisible traces on the outside, on the facade, our interface to the world. Looking for them we might find perhaps an anticipation of evolution happened too soon: a souvenir of the future in us.” 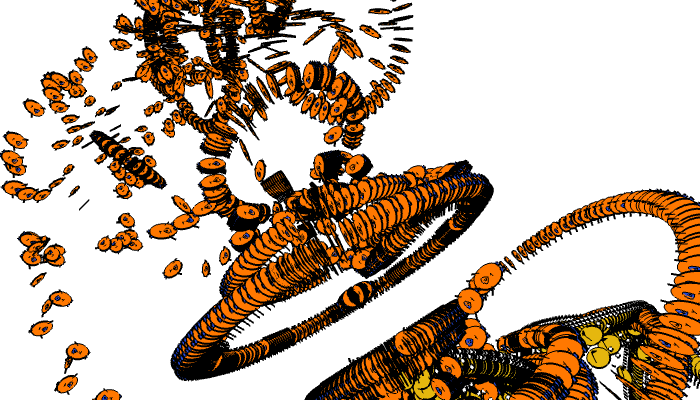 Modular GENE 29 consists of a series of 3 interactive installations, GENE 29 Microcosmos, Synchronicities and Sublimation. They are based on the character of Gene 29, familiarly called Gustavini, anthropomorphic alive organisms visualizing the biological behavior of the cells affected by muscular dystrophies. This project was created as answer to my interested in movement qualities dynamics, which lead me to investigate genetic neurological diseases which alter the ability to move. A human body is a collection of structures of elements interconnected: a skeleton, muscles, ligaments, organs… coordinating together to move. We tend to think that the body’s inner structures are alike for everybody, only differing depending on the gender or exceptional rare cases. But it’s far from it. 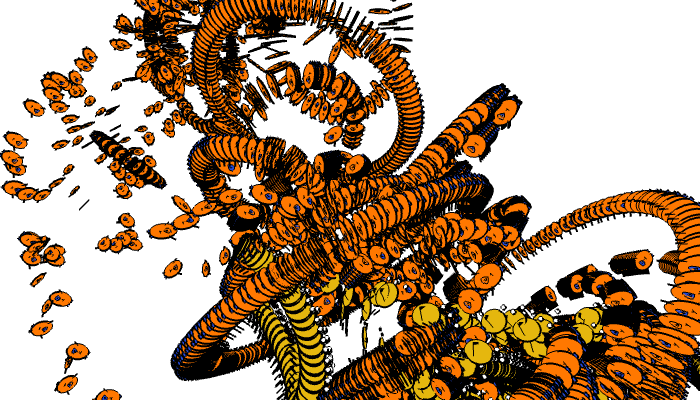 The way the joints are connected differs for everybody, even microscopical variations in rotation between the connection of the joints or the space between them, has a drastic impact on the movement. The same applies for the length of ligaments and muscles… All these data, genetically embedded in each body, give to each person an idiosyncratic movement quality. I call this data Static as cannot be changed. Through training, we can learn to coordinate differently all the elements that compose a body, in order to achieve a broader vocabulary of movement qualities, but, it can go only so far, without breaking. And yet nonetheless those edges are measurable, it’s almost impossible to travel through the whole distance and explore all the possibilities and variations in movement qualities, given by each,
within a life time of training. 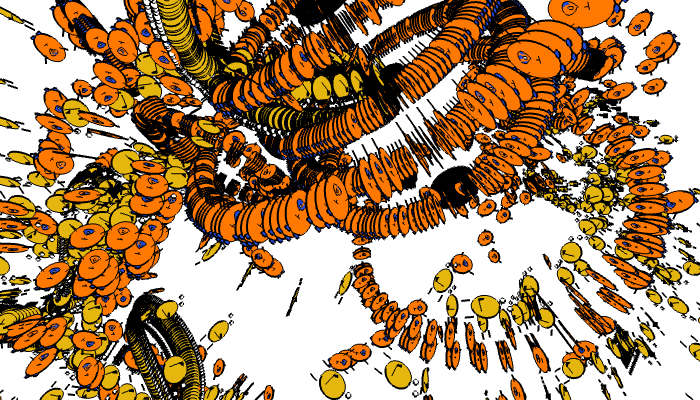 On the other side we have the cellular world, which is not fixed but dynamic in constant regeneration and transformation. Neurological disorders, like Myotonic dystrophy, belong to this one. DM is a genetic disease, characterized by wasting of the muscles and neuromuscular disorders characterized by the inability to relax the muscles after voluntary contraction. It’s caused by the expansion of a trinucleotide repeat, CTG, in the 3′ untranslated region of a protein kinase gene, DMPK.
The process starts with the expansion of a trinucleotide repeat with even thousands of repeats of the nucleotides. Once the expansion starts another RNA-binding protein called “muscleblind “ 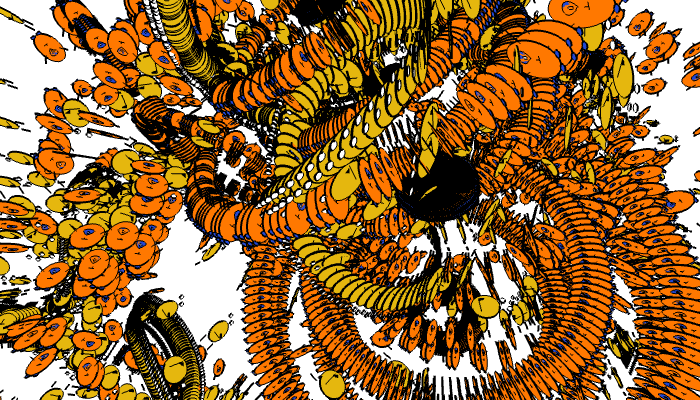 began to bind the genetic material in the nucleus of the cell. At that point the RNA is trapped in the nucleus and the communication is interrupted. Then unable to take the genetic message about which proteins to make, occurs a consequent alteration of the regulation of the genes. One could say: reproduction, multiplication and expansion of a module/cell within a set space, changes the possibility of their movement until the point of diminishing and even stopping it. Once the cells are immobilized, trapped in the middle, they can’t communicate. The ceased of communication develops in the altering of regulation, that allows the well functioning of the organisms. What fascinated me here is the fact that the cellular behavior is a dynamic evolving process not a fixed one. 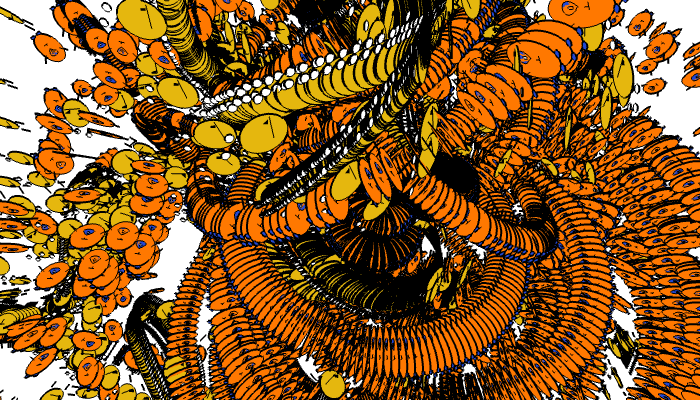 A process that shows that communication depends first on movement and the surrounding spaces. These processes served me as inspiration and starting point for this project, which revolves around the reflections on the perception of the physical, emotional and mental space for movement. I translated parameters defining the behavior of the cells, into a series of interactive codes, to simulate, study and visualize the effect on movement qualities and shape shifting, they produce. Each simulation system focuses on a different set of variables: speed of reproduction, directions in space displacement, growth, death and regeneration. The key factors being the space, reproduction and the paths for communication. 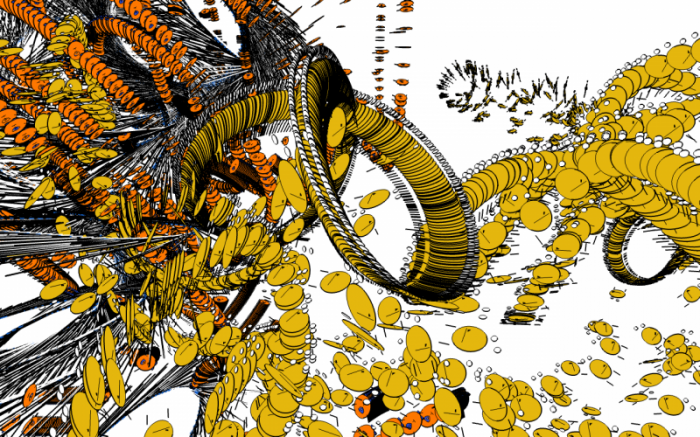 We can see the repercussions of those factors, on the final structure composition, its properties and the emotional feedback. They put in evidence the delicate relation between us, our inside, and the space. A fleeting system, dynamically mutating, that defines who we are, our organic architectures and the identity of our movements. 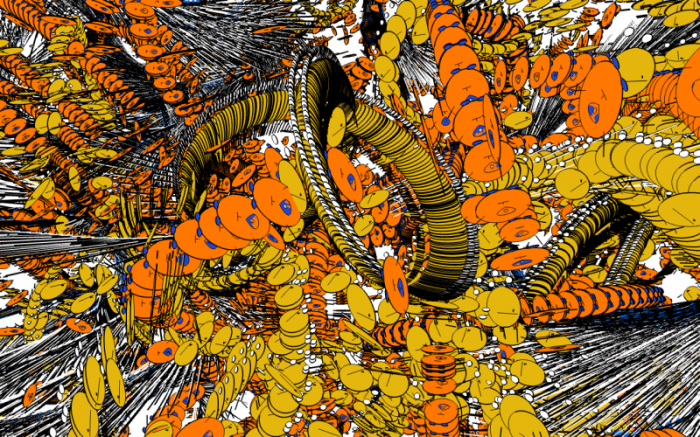 Far from wanting to do a piece that sought to respond in an orthodox way to the particular biological aesthetic or creating a functional device recreated on itself, with gene 29 I used the optics of Manga cartoons, to contaminate the abstraction of the unknown of our inside and create characters, easier to relate to and emphatyze with, to guide us in our try to navigate a landscape where we are lost and in need to find new ways, new opportunities.

«Zooming inside a body we find an hotel full of rooms and stranger guests, the DM1 dark passengers, passing by, crossing path, leaving trails. With each step, the DM1s leave tiny invisible traces on the outside, on the facade, our interface to the world. Looking for them we might find perhaps an anticipation of evolution happened too soon: a souvenir of the future in us.»
Their instructions is to ask questions and facilitate an exploration and a dynamic understanding of the process.
The questions are there, now we need to follow the movements, starting by rereading the log of what we have been so we can recuperate our forgotten trail. Even if it means returning to the places we were escaping from.

GENE 29 in 3D by Paola Tognazzi from paola tognazzi on Vimeo. 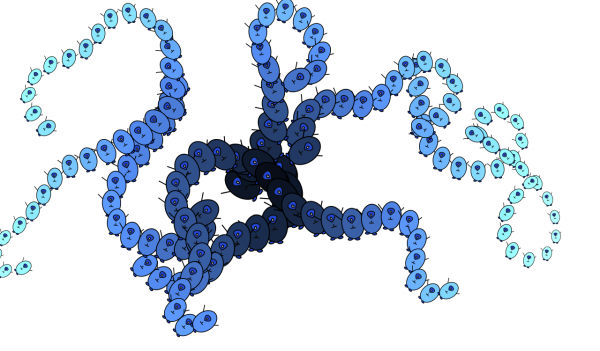 1) GENE 29 SUBLIMATION is an interactive installation, it was the first one of the series. The perspective from which the viewer interacts, with what happens, is frontal, marking a stronger emotional response of direct confrontation. At that time I was angry at the cells degenerative behavior. I hadn’t spent enough time with them to get to know them. My initial reaction was to look for a way out, instinctively agonizing for space. I wanted them to be free, to have the power of hitting the membrane hard enough to open it and be able to expand and breath again, so the muscles could relax. With the more energy the audience move the sensors, the faster and stronger, the cells start reproducing. With each reproduction they get closer, becoming bigger and bigger, until they are so close, face to face to the viewer that it achieves the effect of an explosion, releasing a cathartic feeling of liberation.

2) GENE 29 MICROCOSMOS. In this version, what is happening inside the code, is practically the same as in Gene Sublimation. I only changed the perspective from where I observe the evolution of the process and added the possibility to change it. This time I’m inside the membrane. Time has passed and I got to know them better, I got attached to them and started accepting their degeneration, even admiring it for the beauty of the endless structures created by their relentless reproduction. I zoomed in, to give the feeling of a lot more space between the modules, gaining this way, more time to watch the 3dimensional structures that are being formed. 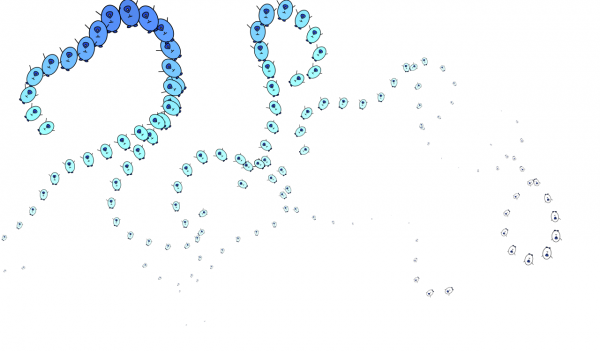 From this new perspective, there is no more need for explosions. The curiosity of how the structures keeps transforming and shape shifting, layer after layer, wins, becoming hypnotic and releasing in its own way.

3) Gene 29 SYNCHRONICITIES is the last one of the series. At this point I’m in love with them. There is a total acceptance which manifests by putting them in a static composition. They are stuck in one place and it’s fine. The movement, the life, comes from breathing. And yet one discovers how dynamic becomes the structure just by playing with the growth, death, and regenerations of the cells. While they slowly appear and disappear they open new path, close others and show trails of all possible trajectories, each one leading to a different state of evolution. 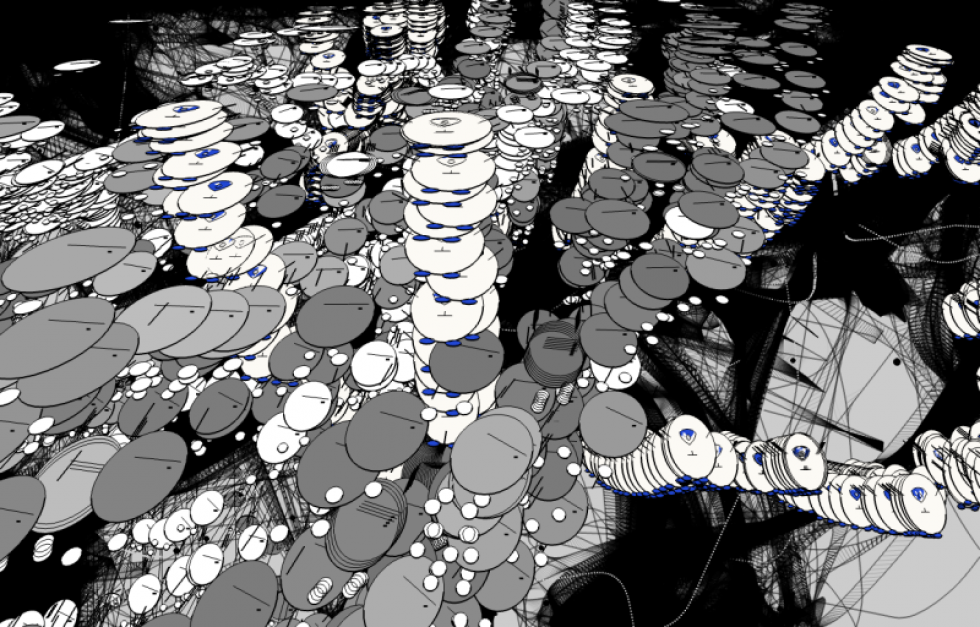 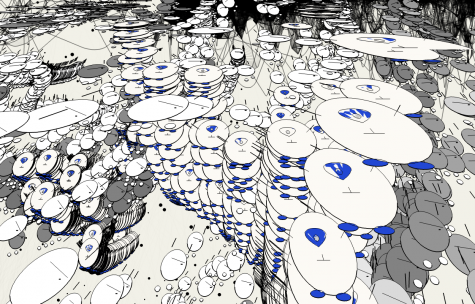 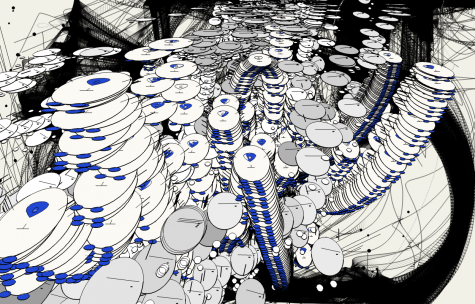 GENE 29 interactiveSensors by Paola Tognazzi from paola tognazzi on Vimeo.