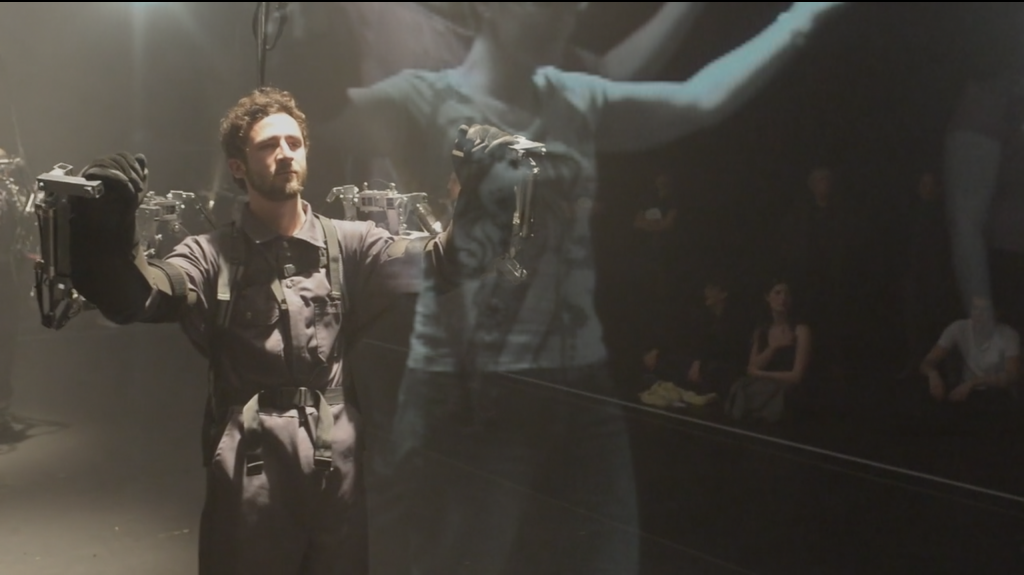 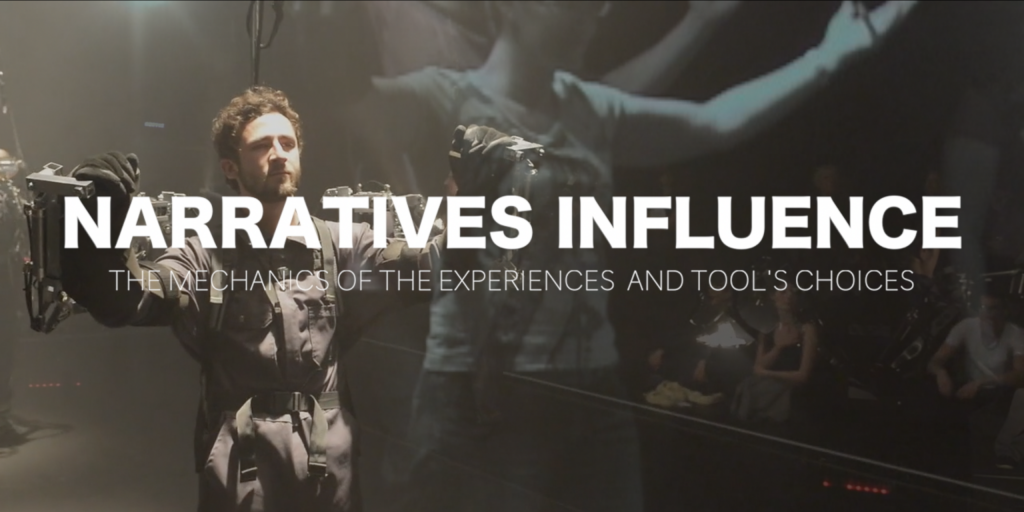 ROBOTS VERSUS SENSING MACHINES. MATERIALIZING THE RESPONSIBILITY AND VULNERABILITY OF INTERACTIVE SYSTEMS
NARRATIVES INFLUENCE THE MECHANICS AND TOOLS CHOICE THAT CREATE THE EXPERIENCES

I put in relation Why do we have organs in pair and only one heart? Paola Tognazzi (2009) with Inferno by Louis-Philippe Demers & Bill Vorn (2015) 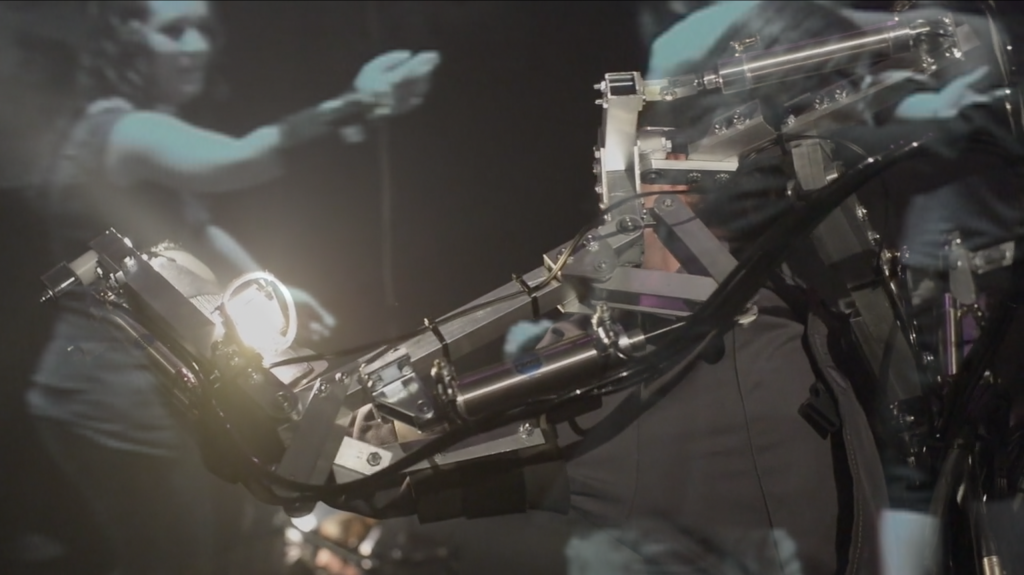 In Why do we have organs in pair and only one heart? I ask the audience to put on Wearable_SuperNow an interactive system, of bracelets embedded with accelerometer sensors that allow the body to speak. The wearers transforms the soundscape, with the energy of their movements. The aural feedback plays only if they move the sensors and the tempo of the music is interactive to the energy of their movements. Then I invite them to follow me dancing. 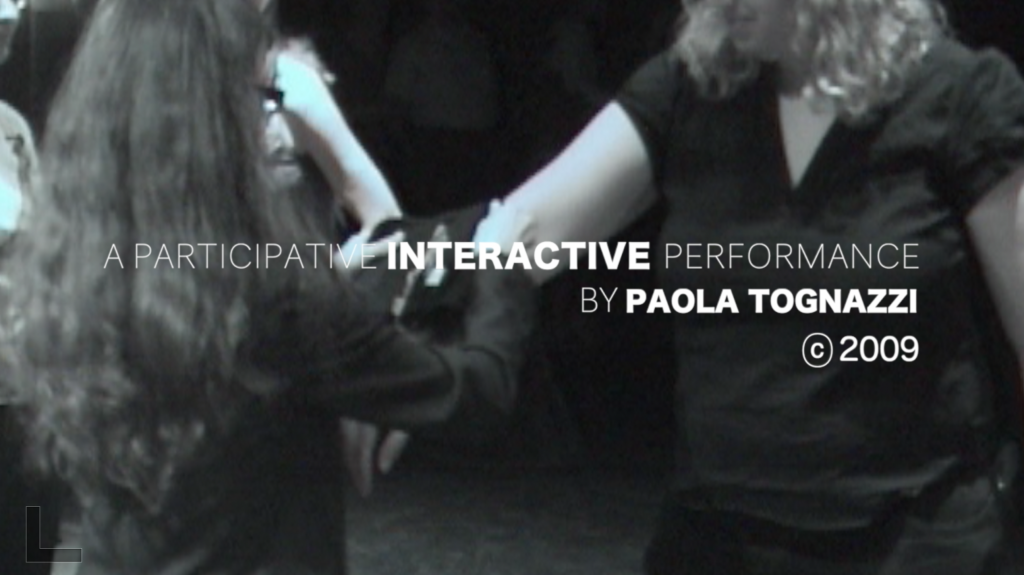 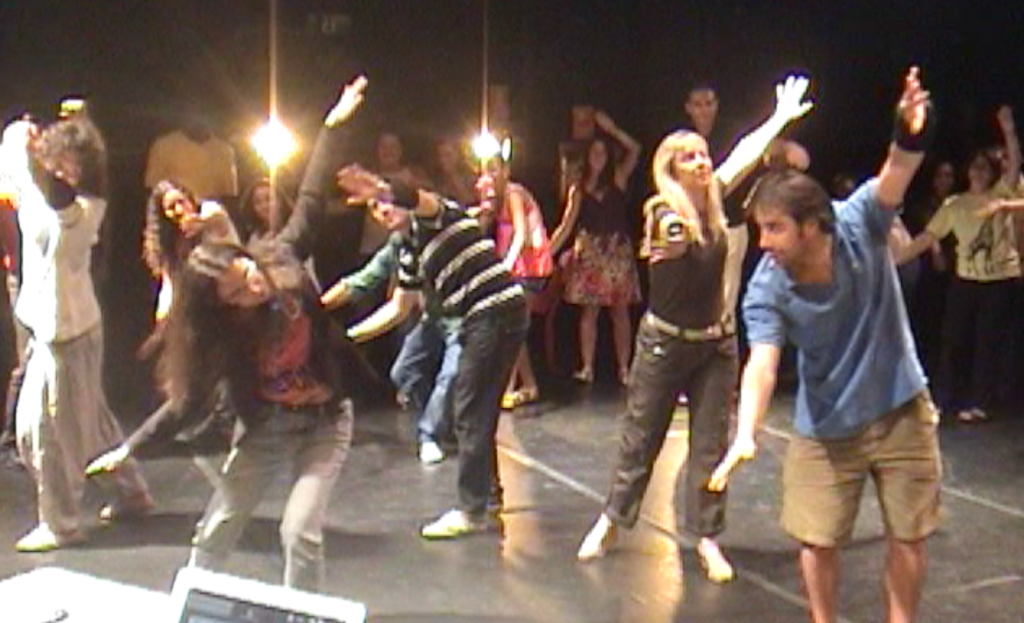 In Inferno, Louis-Philippe Demers & Bill Vorn ask the audience to wear a robotic exoskeleton. The wearable moves them. The choreography is preprogrammed into the wearable system, the wearer only receives the information, no deviation is possible. 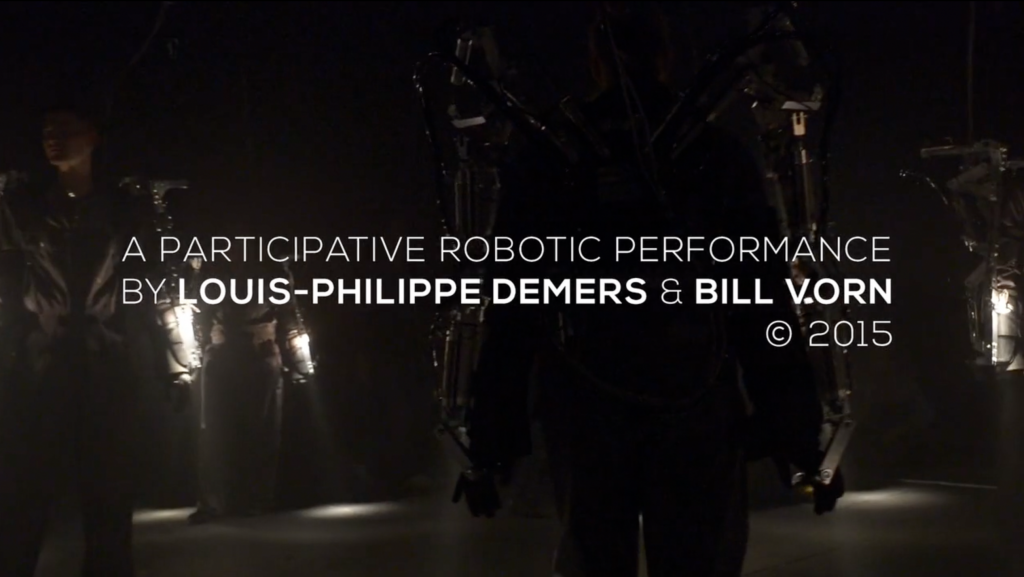 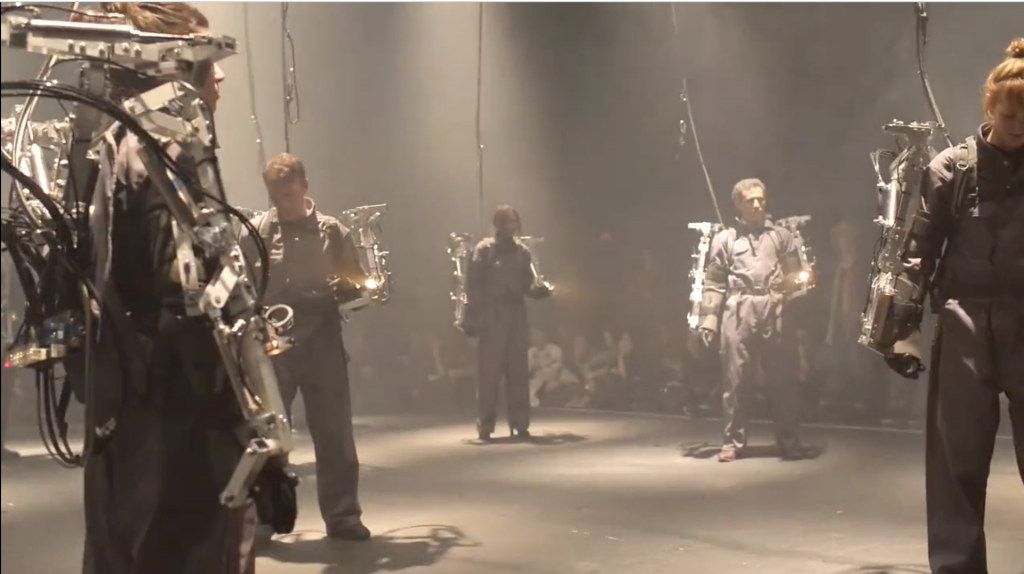 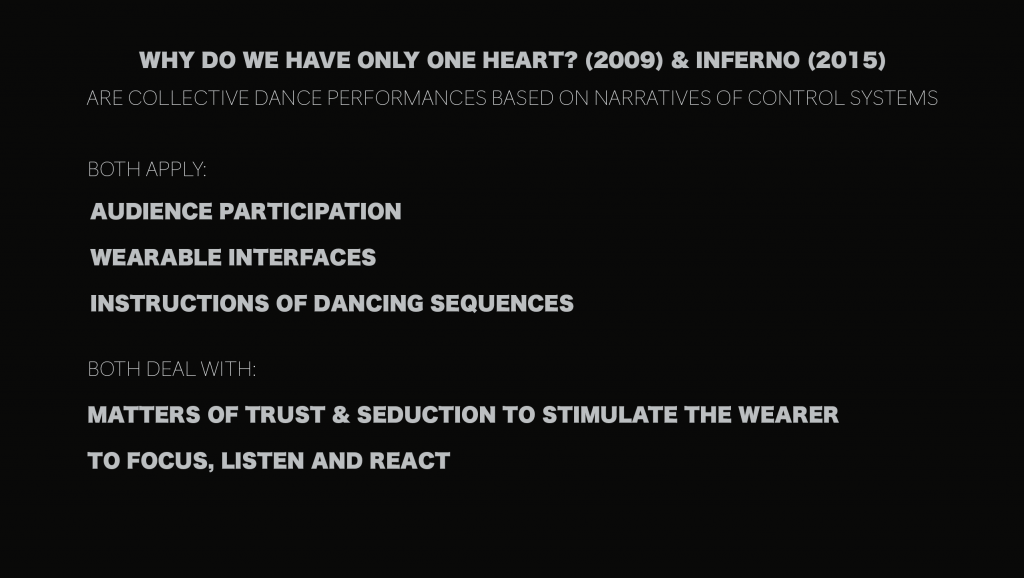 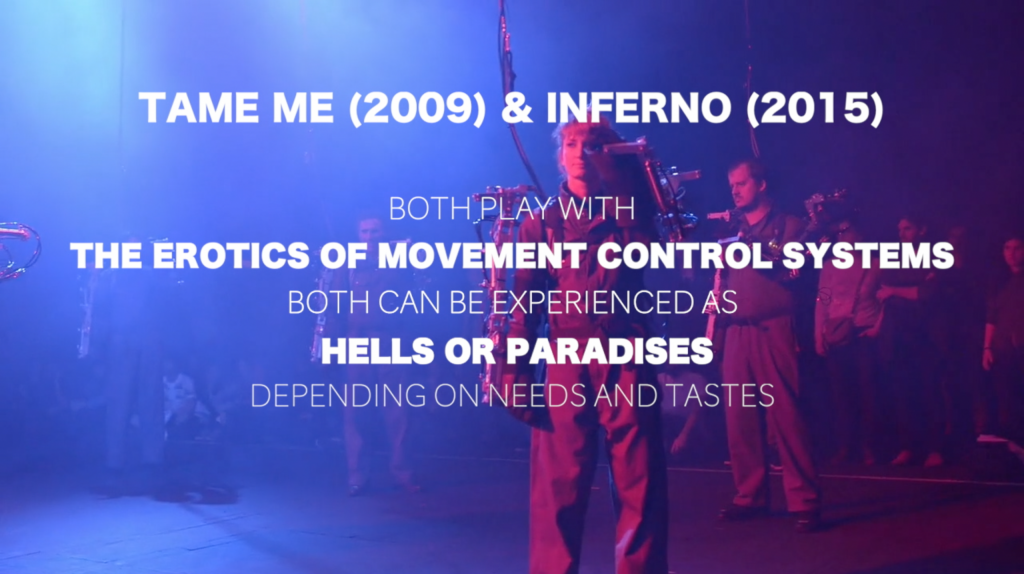 Both play with the erotics of movement control systems, listening and participation, but because of the narratives behind the works, the strategies are different.

IN Inferno PARTICIPANTS ARE MOVED BY THE ROBOTIC EXOSKELETONS.
THEY HAVE NO CONTROL OVER THE DANCE PERFORMANCE;
THEY CAN ONLY MOVE WITHIN THE WIRE (LEASH) CIRCUMSCRIBED AREA.
Inferno IS A SCRIPTED NARRATIVE WITH NO POSSIBLE DIVERSION

What I love in Inferno is that the robotic wearable can move the wearer and the latter can tactilely sense on their body the action programmed by a person far away.

When I superimposed the two pieces, this moment happened when it looked like the participants in Tame Me were gently approaching the ones in Inferno to hug them, perhaps attracted by the little lights shining on their arms. It made me think of a being split in two; ghosts floating around looking to reunite with their souls. 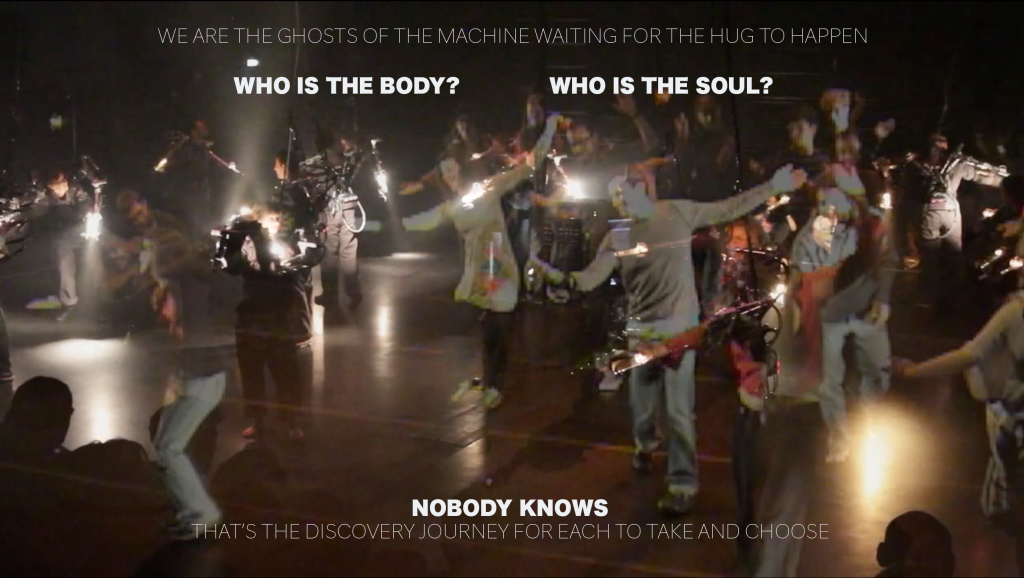 This scene from the Sarah Connors chronicles was one of the interweaving threads of Why Do we have organs in Pairs and only one heart.

My art work with choreography, interactive art and wearable smart materials focuses on Sensing and Connecting systems. I like hybridization: the integration of digital data with analogical materials to create mutually informing systems that materialize and visualize transformations, giving the wearer the super power of capturing and taming the fleetingness of our perception.
I’m fascinated by the politics of the sensorial and the erotics; how contemporary history affects our perceptions and narratives. Data technology per se is information, an intangible essence which, as such, it is neither good nor bad, yet once it’s applied it becomes a material. Once in this form it can be seen and perceived but also manipulated and transformed. Our perception is never neutral, it responds to the fleetingness of the narrative of the moment, which can be aware or unaware.
In 2007, for example, when I started developing Wearable_SuperNow, data technology was portrayed as a medium to free and connect us. Yet history repeats itself and when Louis Philippe Demers made Inferno in 2015, the applications of data technology had already started to switch towards coercing control system.

Narratives define our reality but they are also a form to lie to ourselves and at certain point our bodies simply cannot keep up. Philosophers like Sartre in La Nausea speak a lot about it yet nothing like Art can make one feel it like it’s so well conveyed in this scene in Good Girls by Beth words and Lisa Caruso lyrics «if only my body could endure the misery»

«I’m going to teach you» gently caressing her forehead…The dream is someone or something that teaches us how to break the vicious circle, how to protect our body from ourselves.

BE MY SKIN:is a PhD research on interactive programmable textiles able to teach us to listen to ourselves and others, caressing us.
The poetic I chose to navigate through the field of WEARABLE FUTURE SKINS is:
Narratives influence the mechanics and tools choices of the experience. Wearables the erotics of movement control systems: Robots vs Sensing machines.

FUTURE SKINS WILL BE MUTANT and they will reflect that «Everything you touch, touches you. Everything that touches changes each other.»

AxX BE MY SKIN: A journey from you caressing the textile, to the textile caressing you back.
The art of pushing and pulling strings to materialize movement.
Tapestry as a form of archival information and as a carrier of movement data by Paola Tognazzi Drake.

ABSTRACT:
The aim of this PHD tutored by Sarah Taylor and Sarah Kettley (and influenced by «Sarah Connor’s Chronicles») conducted at the Universities of Napier and Edinburgh in collaboration with DOVECOT studio is to research adaptative actuated tapestry: with the capacity to retain and communicate movement memories by shapeshifting, thus transferring them from a body to another one, in a physical and tactile way.

This research emphasizes the central role of materiality to mediate the tactility of human experiences. Tactility is the sense that strongly impact humans learning and communicative abilities.

The idea is to integrate soft robotics, nano technology with ancestral weaving techniques to develop textiles that can perform both actions combinations: Touch & Move the body (Inferno robotic exoskeleton) as well as listen & react (Werable_SuperNow) to the body. We need both sets of actions to be able to sense and connect.

Ie: To embed movement in textiles is not the challenge but to control the directions of the movements in such a way to touch, guide and produce a narrative of feelings in the body, it is.

My aim and challenge within the field of Wearables is to make Inferno robotics melt into a sensing reactive textile so it become invisible but a lot more powerful and perceptible on the body.

The base of this research is to investigate weaving textural dimension in relation to the structural one (PATTERNS MECHANICS) to embed smart materials, in such a way to create a symbiotic process of shape transformation between real time data instructions and the textile.

The purpose of this work is to analyse:

Weaving patterns and cut as major variables to create textiles with the capacity to absorb and reflect the presence of smart materials;

Similarities, advantages and limits of different weaving techniques and technologies

to understand, negotiate and translate the aim’s narratives in a collaboration between different crafting languages.

REFERENCES CONSISTENT WITH THE NARRATIVE OF AxX BE MY SKIN, Protect me, mark yourself from my experiences:

The Dragon is alive 2014 a reactive 3D printed structure that transform, shapeshift, touch and accomodate the wearer’s movement, I developed at Tu/e University.

METAMORPHOSIS: THE SPACE IN BETWEEN 2015 a 3D printed reactive modular structure embedded in a shirt at Media art Futures. Research on the implications of the 3D experience, through space in relation to movement and transformation, an installation is developed where the tangible is intangible and the static becomes dynamic through the interaction of the viewer in a symbiotic process of formal transformation.

Future Skins a 3D printed reactive full back design in collaboration with prosthetic 3D designer Jonathan Ramirez Diaz de Leon.
FUTURE SKINS is an investigation about wearable 3D printed structures, integrated in garments, in such a way that they can create a symbiotic process of transformation of form between the wearer movements and the structure. It is a study on the materialization of movement and ecological ways to harvest the energy of physical movements to trigger textiles reactions.
This collaboration between the italian artist and physical interaction designer Paola Tognazzi Drake and Mexican expert 3D modeler Jonathan Ramírez Díaz de León aims to promote how wearable technology can be implemented in everyday life and how for that to be possible it’s necessary to design, thinking about the ergonomy of the body, the movement dynamics and natural mechanics without skipping fundamental steps in the analysis by using electronics.

FUTURE SKINS by Paola Tognazzi from paola tognazzi on Vimeo.

Bruna Goveia da Rocha PhD researcher at Tu/e University. Flow: Towards Communicating Directional Cues through Inflatables «Current research in wearable technologies have shown that we can use real-time tactile instructions to support the learning of physical activities through vibrotactile stimulation. While tactile cues based on vibration may indicate direction, they do not convey the direction of movement. We would like to propose the use of inflatables as an alternative form of actuation to express such information through pressure. Inspired by notions from embodied interaction and somaesthetic design, we present in this paper a research through design (RtD) project that substitutes directional metaphors with push against the body. The result, Flow, is a wearable designed to cue six movements of the wrist/forearm to support the training of elementary sensory-motor skills of physical activities, such as foil fencing. We contribute with the description of the design process and reflections on how to design for tactile motion instructions through inflatables.»

«Pulse” draws the viewer into a speculative world in which textiles come to life.With so-called ‘shape changing textiles’, or textiles that can actively change shape, we investigate the relationship between people and clothing. Our rational thinking is always intertwined with subjective perception and feeling, and in a world of textiles and clothing, the tactile and sensory are eminently important in shaping our ideas and design directions.
Kathryn Walters Weaver Form from Flat Exploring emergent behaviour in woven textile. A PhD on Applying molding and paper yarns, to form a 3D shape with weaving at Boras University.
Anouk Wipprecht the Pangoline project.

The rigour of Léveillé’s choppy and precise choreography references human imperfection but also attests to the skill and athleticism of the accomplished dancers. At times comical and playful, at others austere yet poignant, the music is equally unpredictable. Exploring our solitude and irrepressible desire for contact, this work exemplifies Léveillé’s expressive minimalism with raw and potent beauty.

The modesty of Icebergs – by Daniel Léveillé

Both works by Daniel Leveille and Enzo Cosimi, the performer are naked, but the nudity is not gratuitous it has nothing to do with sexuality and provocation as unfortunately, so very often happens. Here the nudity is fundamental as the performance happens on the skin.
Regis Obadia La chambre

and lastly but not least my god Anne Therese de Keersmakers. A genius of music physical analysis and translation.

Accompanied by the pulsating tones of his music, for an hour and ten minutes ten dancers occupy the stage, delineated by a curtain of fine strings, displaying an impressive succession of virtuoso dance phrases. The mathematical figures, the sustained repetition, the geometric occupation of the space, the art of continuous variation – everything that had gradually become the choreographer’s signature was pushed to the extreme in Rain.

In Rain, De Keersmaeker approaches the company of dancers as a close-knit group of pronounced individuals who, one by one, play a vital role in the whole. Seven women and three men allow themselves to be propelled by an unstoppable joined energy that binds them together. It’s a bustling network in which breath and speed is shared as well as that special comradery that forms when you are beyond fatigue.

Dance and philosophy
The role of naming things and looks perspective in the responsibility of the narratives we live.
Interview to Paola Lattanzi on her piece Being and Doing

Sartre: The look of the other that nullifies us

Interview to Esther Barbero, about her workshop Invocations inspired by Focault idea of the peripheral look that make us become part of the scene versus the optical look that put us in the background.

The humanism of Jean-Paul Sartre and the anti-humanism of Michel Foucault. Foucault criticizes Sartre for building his philosophy from the concept of man. Sartre reproaches Foucault for his lack of originality and his neglect of history.