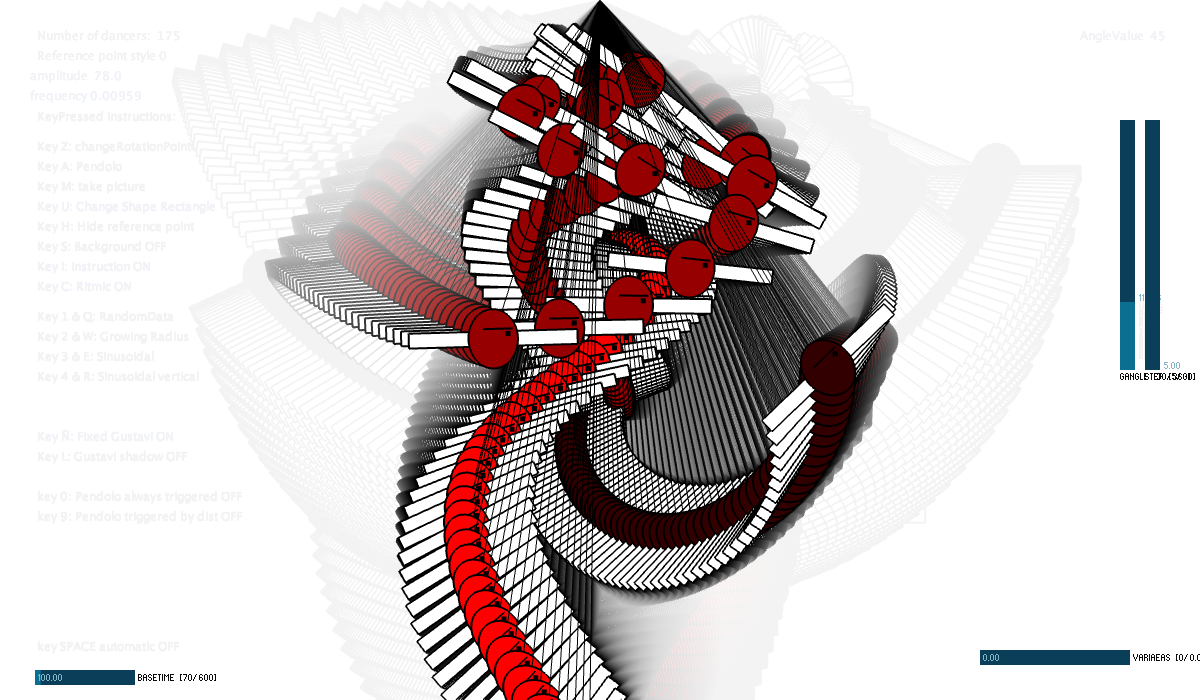 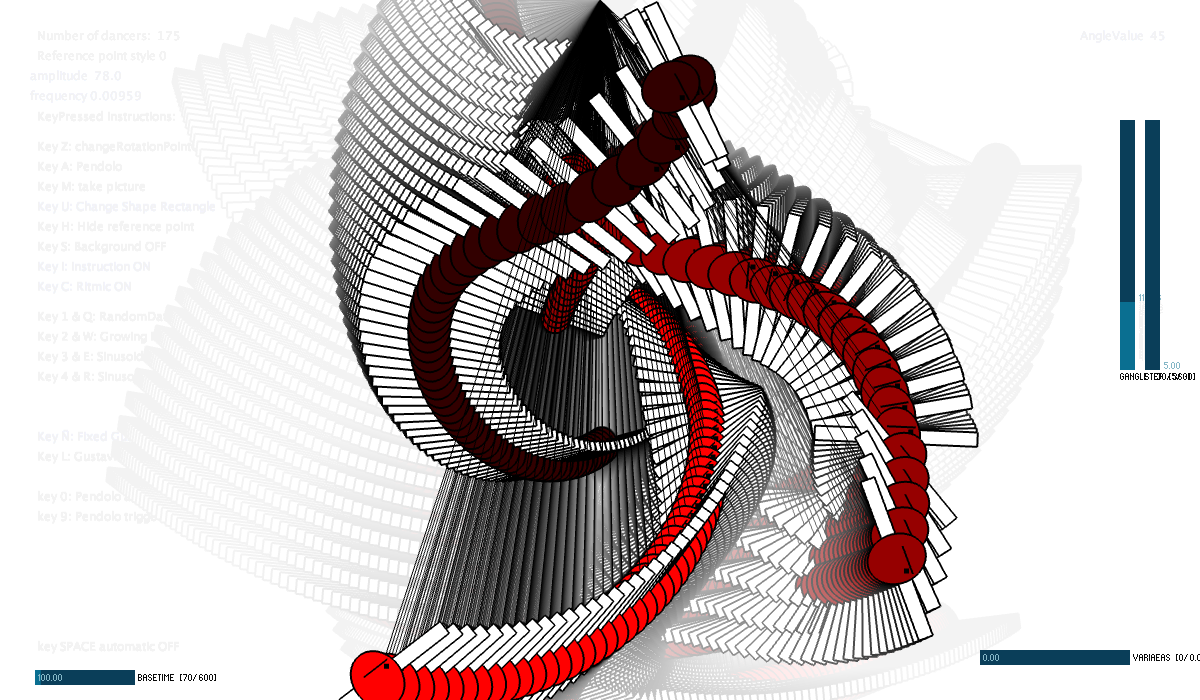 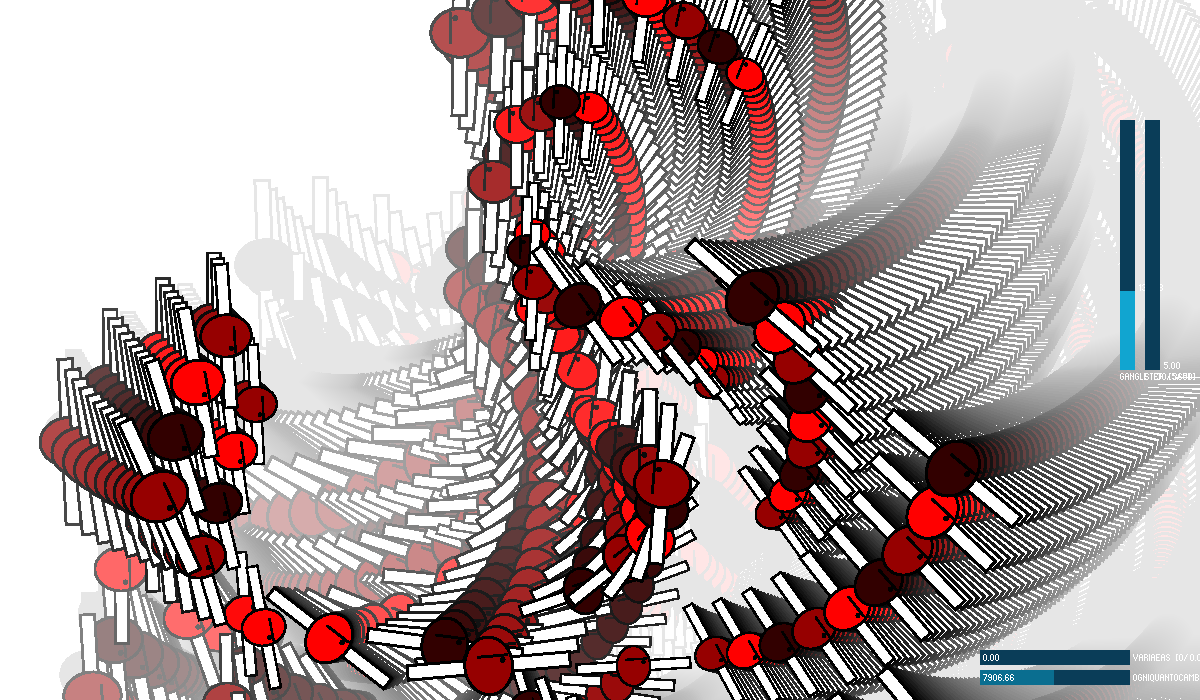 It is a speculation about the effects immaterial flows and virtual spaces have on our bodies. Can a program of an algorithm of angular rotations playing with the flow of intentional displacements and transformation of a modular patterns representing the internal architectures of our bodies, trigger emotions and create physical experiences and stimulations on the body? If we could see our cells and genes moving, which shapes would they form and how will it affect us?

The design of choreographing spaces is based on the study of physical movement qualities and its translation into coding parameters. One can compose different styles of spatial choreographies and see how each one provokes a different response, sensation and feeling on the body. It aims to enhance and generate new understandings of physical interaction design practices and a platform to facilitate interdisciplinary projects bringing the knowledge of dance into conjunction with disciplines such as technology research, fashion, architecture, music and cognitive science. You can connect the software to kinect, camaras and wearable sensors.

Choreographing Space by Paola Tognazzi from paola tognazzi on Vimeo.

The performance of TIMING into the materialization process of the Design.

Designing a choreography is like designing a textile pattern. The direction of the threads change the behavior of a textile. Same way the directions of the movement change the behavior of a body. The combination of rhythms and directions creates sequences in choreographies and textiles.
Changing the shapes of an element/pattern through the movement of the body, visualizes the internal geometries of the body and the element.
If we connect the dynamics of a body to a textile pattern in such a way that physical movement change the directions of the modules forming the pattern, we create a textile that has different properties according to how the body moves.

Silent Wind is a variation of Choreographing Spaces to study and specifically play with the effect of rotations on trigonometric and linear modular elements compositions, to design and print patterns that create dynamic visual effects once worn. With this simulation tool you can play with different styles and speeds of rotations and see how each has a different effect on the composition of elements.

This series is based on three algorithmic landscapes simulations. They show the possible evolution of modular pattern’s systems, once connected to the dynamics of a body. Here the variables, defining the patterns, are mapped to the energy and directions of the limbs, reacting to the different directions of push and pull and transforming the pattern of the textile thus changing its behavior. You can connect it to external interactive interfaces like the Kinect and wearable sensors.

VIDEO STUDY 1: THE EFFECT OF ROTATIONS ON TRIGONOMETRIC PATTERNS

Silent Wind2 by Paola Tognazzi from paola tognazzi on Vimeo.

VIDEO STUDY 2: THE EFFECT OF ROTATIONS ON LINEAR GRID PATTERNS

Silent Wind 2 by Paola Tognazzi from paola tognazzi on Vimeo.

STUDY 3: THE EFFECT OF ROTATIONS ON NOISE CURVES
video in process………..

Silent Wind_Installation by Paola Tognazzi from paola tognazzi on Vimeo. 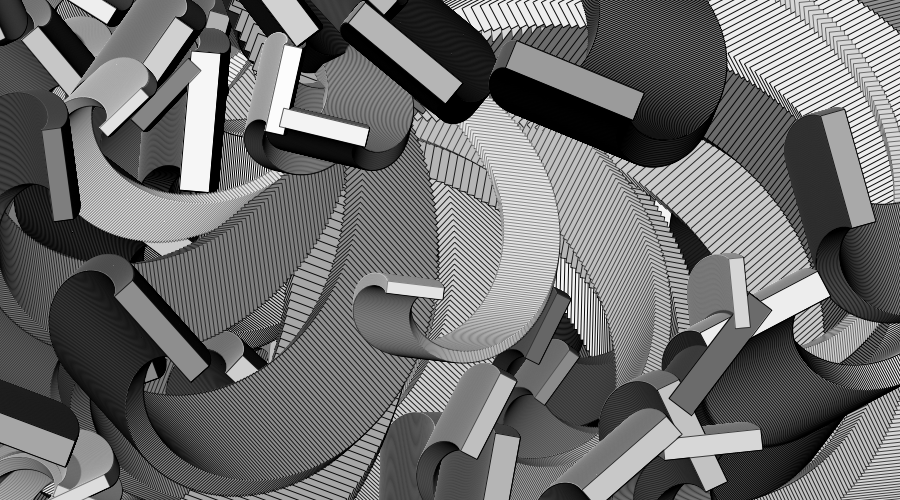 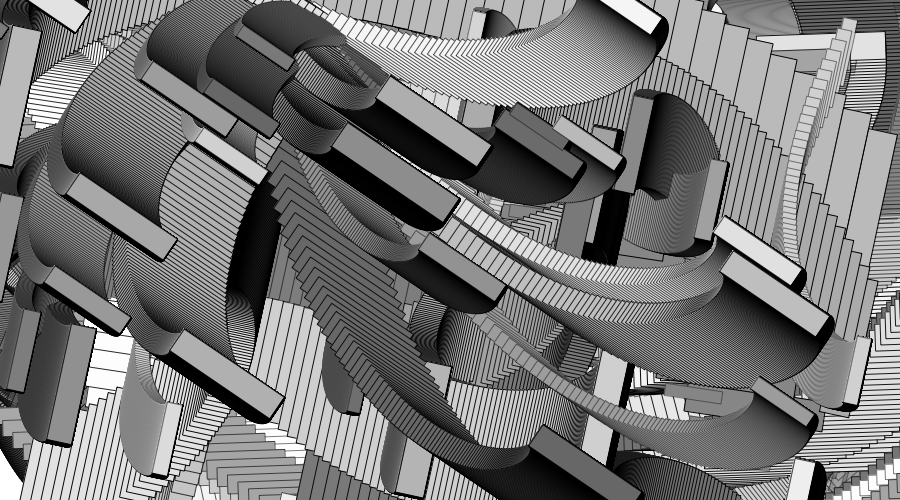 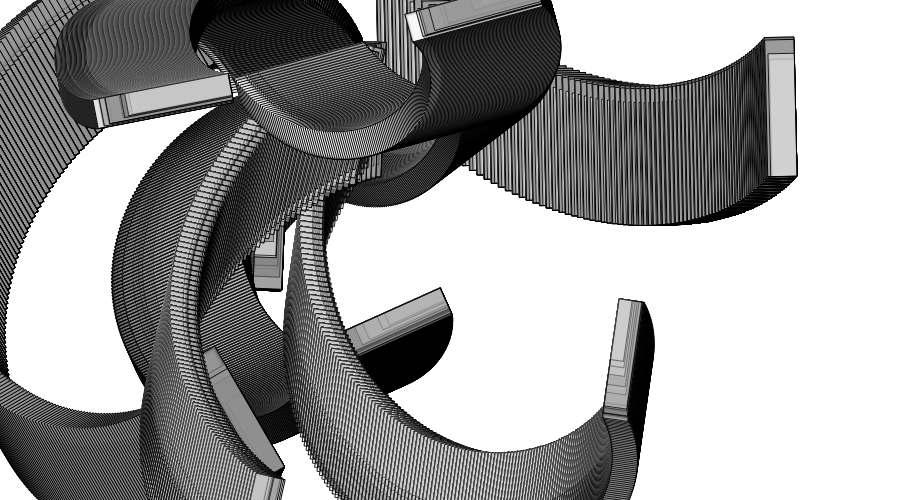 I applied it to the project metamorphosis, the creation of wearable 3D printed designs. Based on the information and data of the body it can materialize the information to a design pattern, which interacting with the body shape shifts and triggers different responses.
// 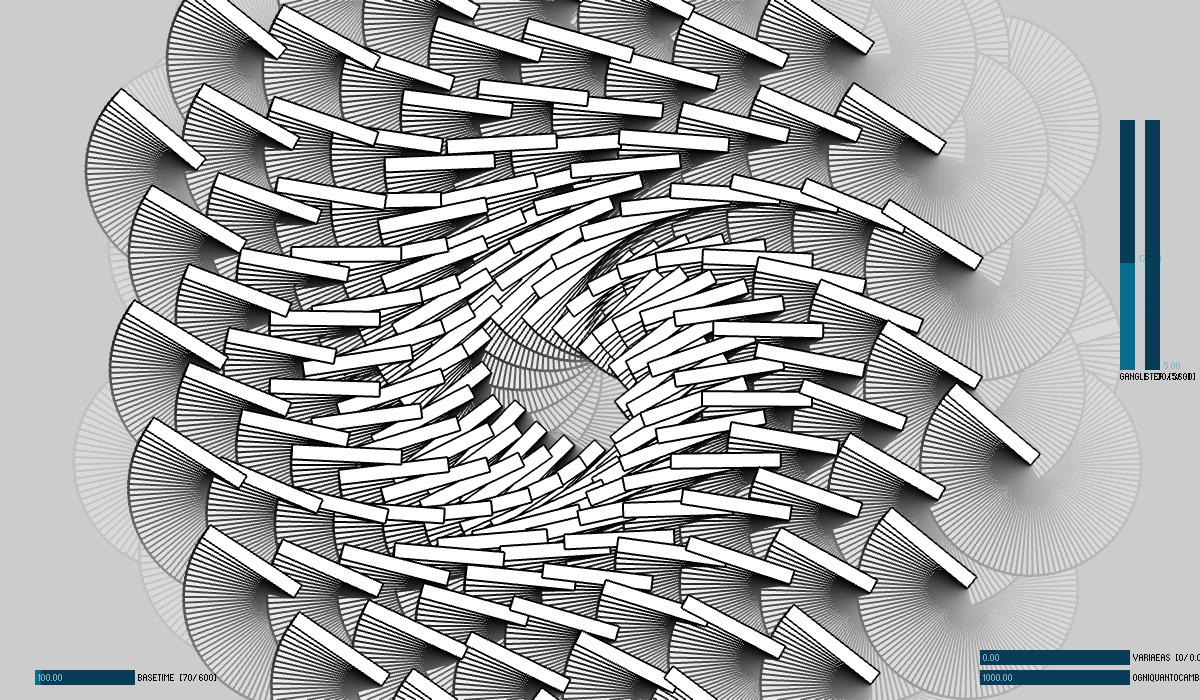 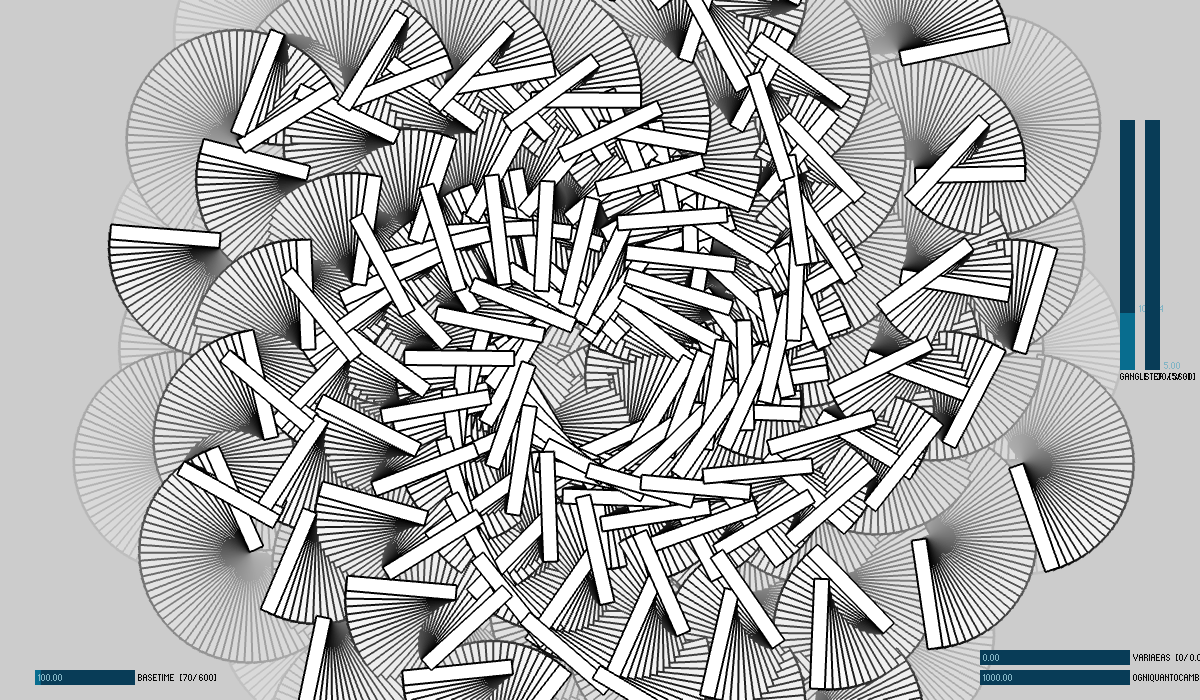 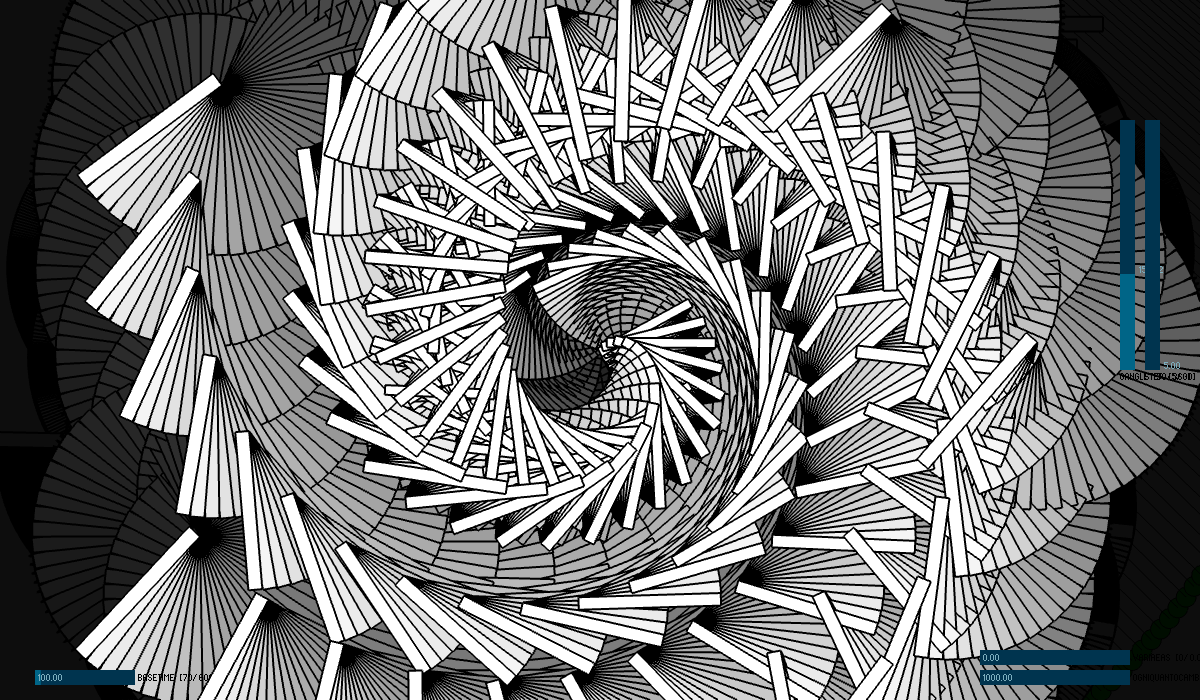